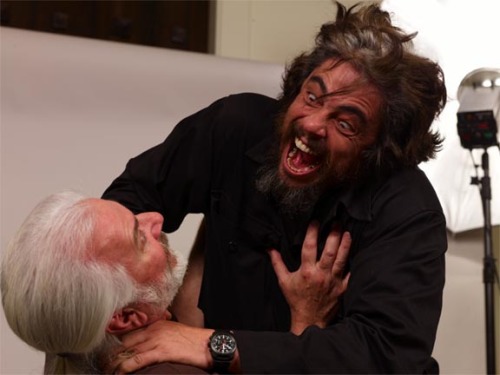 More of this next time, Benicio

[Minor plot points in this review]

The Wolfman finally premiered.  I haven’t seen the 1941 original but from what I’ve read many of the elements are the same, including character names. Set in 1891, Lawrence Talbot (Benicio del Toro) is a Shakespearian actor with a traumatic childhood who got sent to America to live with his aunt where he presumably lost all traces of a British accent. He returns as a brooding adult to his childhood home after his brother Ben is savagely killed and Ben’s fiancée calls Lawrence back.

Lawrence’s father, Sir John Talbot (Anthony Hopkins), lives on an isolated estate in Blackmoor, England with only one servant, Singh. If you know nothing about Blackmoor, it is where all the fog goes to die. There is a nearby village full of superstitious folk and a gypsy camp nearby. People live in terror of the beast that killed Ben Talbot. The movie follows Lawrence as he tries to discover who or what killed his brother, how he gets mauled for his efforts by the beast and becomes one himself. Hugo Weaving adds to the cast as a Scotland Yard Inspector trying to serve justice in Foggyland.

The story is good, but if you expect to be scared, you will be disappointed. There is very little to be scared about, unless blood and gore scare you. Personally I didn’t expect to be scared but I did expect to feel some tension and intrigue. I also expected to care about Lawrence Talbot, as the innocent that gets turned into a monster and is persecuted by those around him. Just like for Frankenstein or King Kong, I wanted to root for the beast. Unfortunately in this movie the plight of the werewolf didn’t connect with me. Perhaps if we’d seen his story through the eyes of a caring brother or the long-suffering manservant Singh, the movie would have been more interesting. There are no solid female characters either- Ben’s fiancée Gwen (Emily Blunt) does very little. I understand she was in the original- and that’s the only reason I can see for her character being there. Mostly she looked pretty in her Victorian garb- she wasn’t given much else to do.  There is zero romantic chemistry between her and Benicio’s character, even though the script tried to force it.

None of the main characters had a great performance; even Benicio (gasp) didn’t do it for me. I think he was going for depressed, and just came out as disinterested. Anthony Hopkins was all over the place- he couldn’t figure out if he was campy, or tragic, or evil. If he was going for insane, he didn’t quite make it. Very disappointing performances from two actors I adore. Hugo Weaving and Art Malik (Singh) performed well but their characters were sadly underused.

There are some good things about this movie. For example, Lawrence’s creepy nightmares/hallucinations were a good way to establish his mental state throughout the film.  I liked the werewolf transformation and makeup.  I was never much a fan of too much wolf snout, so this less wolfy version was good for me. I also like that the wolf kept his clothes on, signifying the humanity left inside. (Although now that I think about it, if he had lost his clothes then we would’ve had naked Benicio shots in the morning… hmm.) The beastly attacks were good, especially the one at the gypsy camp and the asylum medical theater. Nice use of gore. There could have been more, actually. I mean, they already had the R rating, right?

All in all, The Wolfman is watchable but a bit dull. I expected a more exciting version of the classic. 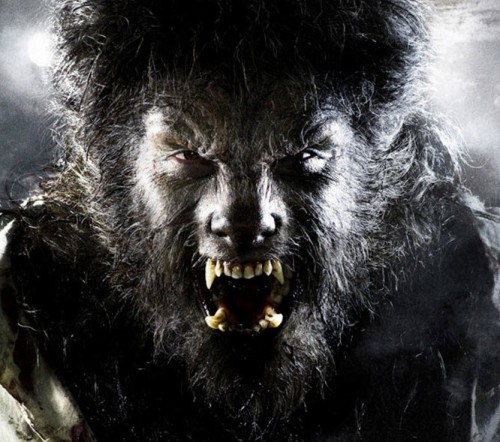 I am very excited about seeing fellow boricua (and Oscar winner) Benicio del Toro in the upcoming werewolf movie The Wolfman, especially now that the new trailer is out. It looks great! Considering that Anthony Hopkins and genre giant Hugo Weaving are also in the cast, it’s going to be hard to wait until February 2010 for this film. I haven’t seen the 1941 original movie so I hope fans of the first film enjoy it too.

Del Toro has also been in other genre productions, most memorably as Jackie Boy in Sin City .  Hopefully we’ll see him again soon in more sci-fi or fantasy titles.

And the first trailer in case you missed it: