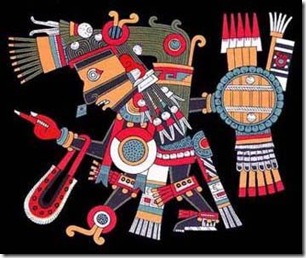 What would happen if the Aztec god of trickery Tezcatlipoca were to appear in our world? How would he gain power? By going viral of course. This is the premise of the novel Smoking Mirror Blues, written by Ernest Hogan.

Set in Los Angeles, the story begins when Chicano virtual reality game designer Beto Orozco uses bio-nanochip technology to revolutionize religion and bring an AI god to life. He appropriates this technology created by Mexican friend Xochitl Echaurren, originally for use in belief system research. Things go terribly wrong in Beto’s weird science experiment and he winds up possessed by Tezcatlipoca. Meanwhile in Mexico, Xochitl is hounded by monotheist fanatics due to her god-creating program.

During the ‘Dead Daze’ celebration, where permissiveness and violence are the norm and the mediasphere is always watching, Tezcatlipoca or ‘Smokey’ as he is nicknamed, finds fertile ground to begin his reign of chaos. Smokey topples a gang leader, and as the gang’s new boss, he has direct access to its corporate sponsors. In this world, corporations have adopted gangs and integrated them into LA society. Previously the gang’s main job was to patrol their turf for people who didn’t have their sponsors’ latest apparel- a type of aggressive Fashion Police. With Smokey at their head, the gang members become unwitting minions of a malicious god. The gang helps Smokey gain followers for his hypnotic music and personality cult, while hopped up on the drug of choice ‘Fun.’ ‘Smoking Mirror Blues’ is the name of Tezcatlipoca’s hypnotic song set to dominate the world via mediasphere.

Besides AI technology, the author presents a future LA where races are mixed and celebrated. The author calls it a ‘recombocultural trimili world’. You can easily switch races and alter your appearance through cosmetic technology. Other interesting technologies in the book are robotic guard dogs, a Toshiba sonic immobilizer, and a tranquilizer-infused ‘Peace Foam’ used for crowd control.

Ultimately the story is about how Smokey manipulates peoples’ desires and the media to gain power. The book Smoking Mirror Blues, just like Tezcatlipoca, is a bit chaotic. It constantly shifts from one point of view to the next, even of secondary characters. The style is literary shaky cam. Some people might like this, but I must admit that shaky cam makes me nauseous. There are also constant plot interruptions: hallucinations, news station coverage, explicit sex scenes, detailed travel time, and the monotheist cult’s surveillance. I would have preferred a more focused story. Still, I enjoyed the futuristic technology and the idea of an Aztec god running amok in modern times. Also, Smoking Mirror Blues really brings the diversity in terms of ethnicity, gender, and sexual orientation of the characters.

UPDATE August 8, 2010: There is a great interview with Ernest Hogan over at ‘La Bloga’ about his background and other works.

Lunar Braceros (Calaca Press, 2009) is a science fiction novella set in a dystopian 22nd century in which class relations have taken a turn for the worse and where corporate greed is barely limited by the State. The United States is no longer united; after an east-west war some U.S. states joined several Mexican states to form a new political entity called Cali-Texas. An association of the top multinationals has formed the New Imperial Order and control just about everything, including governments.

The unemployed and homeless are rounded up in Reservations, where they are forced to work as cheap labor to pay for their upkeep unless they can get a job outside the reservation or have the smarts to go to college for an in-demand position. Earth has no more room for trash, and since humans depend increasingly on nuclear energy, corporations have decided to ship off some waste to Earth’s moon. They also expand the lunar mining business and begin establishing lunar colonies. The main character, Lydia, is a Reservation resident who joins the burgeoning resistance movement with her brother and gets sent to prison for her troubles. To get out early and send money to her family (thus freeing them from the Reservation) she signs up to use her computer skills as a lunar waste worker. While there, Lydia and her coworkers discover a horrifying truth that forces them to reevaluate their jobs and create a new resistance, this time on the moon.

While I found the concept very interesting and different, I wasn’t particularly fond of Lunar Bracero’s narrative style. It is contrived so different people jump in telling bits of the story and world history to a ten year old boy- often making it read like a lecture. I preferred the parts where it seemed more real-time, drawing you into the action. Also, because the story is set up so only the rebellion sympathizers are speaking, you get a very limited view of the world. The ones telling the story are the little boy’s family and friends, so the voices are biased, presenting themselves (the poor people) as inherently good, and the rich capitalists (if we see them at all) as evil or at best indifferent. Still, it is refreshing to see the point of view of the oppressed and their grassroots efforts at improving their situation when a lot of sci-fi tends to focus on solitary heroic figures or present a top-down approach. Another thing I liked was the mixture of cultures and a strong, smart, female presence.