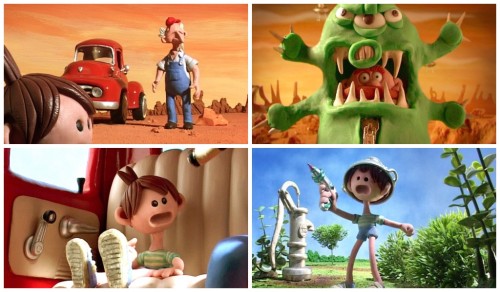 Perusing the Internet, I came across a blog dedicated to Science Fiction topics surrounding Mars. The Marooned blog recently posted about an excellent stop-motion short from Argentina called Viaje a Marte (Journey to Mars). It’s been around since 2005, and if you haven’t seen it you’re in for a treat.

It took two years to make this independent production, but it was well worth the effort because it has won dozens of awards around the world. An interesting production note is that the voice actors were purposefully non-professional. The Journey to Mars team felt this made the short feel more spontaneous and natural.

Directed and animated by Juan Pablo Zaramella, the story is based on a childhood anecdote from the script writer, Mario Rulloni . The short is about a boy, Antonio, whose grandfather seemingly takes him on a trip to Mars (in his tow truck, no less) but nobody believes Antonio and he ends up bitter about the experience. I won’t say much else, other than you won’t be disappointed.

[Side note: Zaramella has other interesting shorts on his Vimeo Page. Check out Lapsus, the fun Lapsus “interview”, and the teaser for his upcoming Luminaris.]

Journey to Mars is on YouTube in Spanish with English subtitles (16 minutes). The Viaje a Marte official website has making-of pictures and a video showing Zaramella working with the foam rubber and modeling clay figures.

This weekend I made it to the Karibukai Animation Festival. I say “made it” because it was raining constantly this past week and I waited until the very last day of the festival for drier weather.

I got the chance to meet Carlos Goméz Nicolás (Nikodemo), creator of the funny animated series from Spain Cálico Electrónico. Niko was freshly arrived from a (wet) tour of El Yunque rainforest. Poor guy came to 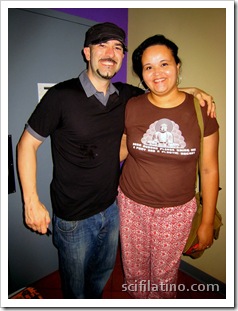 normally sunny Puerto Rico and barely saw the sun.  He was nice enough to autograph stickers of his Cálico series for free. Cálico Electrónico is about a short chubby janitor/superhero that fights (or tries to fight) bad guys in Electronic City. Some videos the Cálico website are dubbed into English so if you can’t understand Spanish you’re in luck.

I saw Dig Comics, a pro comic book reading documentary with writer/director/host Miguel Cima (of Argentinean heritage).  From what I saw, Cima is very much a comic book fanboy and this documentary is a labor of love.  Made me smile.  There was a second documentary about comic books called Comic Book Literacy. It was a longish but very educational. I learned something of the history of comics in the United States.

Of the Japanese anime I saw, I found Gundam Unicorn to be the most interesting and will be looking for the DVD. I hadn’t seen any robot anime since Voltron.  I thought it had ruined me for anything else.

The shorts contest was disappointing not because of the quality but because of the quantity. There were only three contenders, and three prizes, so it wasn’t exactly a fierce competition. Hopefully next year we’ll get more entries. Here were the winners:

1st place ($250) and Viewer’s Choice award ($150). Fried, Elena Montijo Capetillo. This was a cute dark humor story about a little girl who loves her chickens but each bird is a bit crazy (and the girl too). I voted for this entry because it was the one I liked best. Having it created by a woman was a nice bonus. Check out her promo video at the link. It shows a bit of the winning short starting at 0:37.

2nd place ($200). Boricuas Beyond: Happy Hour, José Luis Collazo. This animated short from the Puerto Ricans in the future series Boricuas Beyond was the one I least enjoyed. Although the animation is excellent, I didn’t like the crude humor.  It uses local pop culture and slang heavily so it would be hard to get if you’re not a Puerto Rican living on the island.

3rd place ($150). Ventana, José Vázquez. I’m not sure Ventana was a story, it was more like a look at past and future Puerto Rican cartoon characters, some corporate logos and others from comics and webseries. Vázquez also presented a short called Mad Taíno about a native couple who fight Spanish conquistadors.

I really hope more animators and  film producers participate in future Karibukai events. It’s great exposure and the money isn’t bad either. Here’s to next year not having such foul weather that keeps people home. I really enjoyed the event and hope the Karibukai Festival will become a yearly tradition.

Recently I received a press release with interesting news about an animation festival that will take place for the first time in Puerto Rico next weekend. Here are the details: The Karibukai Animation Festival will take place from May 27th to the 30th at the Puerto Rico National Filmotheque in the north wing of the Cuartel Ballajá, near the San Felipe del Morro Castle in Old San Juan. Karibukai will feature full-length animated films along with a contest for local animated shorts. According to their website, Karibukai is the Japanese word for Caribbean.

International productions that will be shown include:

Karibukai is organized by Paquines, a nonprofit organization bringing animation, comics, and film fans together in Puerto Rico. Check out the Karibukai official website for more details, film listings, and contest info. I’m looking forward to checking the festival out so if you can’t be in beautiful Old San Juan next weekend, I’ll let you know what went down.

UPDATE Oct. 21, 2010: From the Hollywood Reporter:  “Animator Rodrigo Blaas is in negotiations to make his feature directorial debut for DreamWorks Animation, which is working with Guillermo del Toro to adapt Blaas’ award-winning short Alma into a full-length movie.”