Selena Gómez, Ricardo Montalbán (here with Esther Williams in the 1948 film “On an Island With You” ) and Lauren Vélez were were recognized at the 2009 Alma Awards ceremony

As an update to my previous post, here are my impressions of the Alma Awards. First, it was not live.  While I found this annoying in a way I loved how it shaved off show time. Usually award shows like this go on for way too long. This one was packed into two hours of nonstop acceptance speeches, video montages, and performances. The best performance was by a young singer called David Archuleta who I had never heard of before but since the tweens on Twitter were going crazy for him I looked him up and turns out he was last year’s American Idol finalist. He sang a timeless love song in español (Contigo en la Distancia- Together Across the Distance) effortlessly. Kudos to David! Shakira gave a disappointing overly sexual performace of She-Wolf. Shakira, you don’t need to do that, honey. Your talent transcends any body gyrations you can make onstage. Nelly Furtado sang Manos al aire (Hands Up) from her first album in Spanish (and I loved it). I think the only thing I really disliked about the Alma Awards was George Lopez’s sense of humor- repeatedly putting down your own people to get laughs really isn’t the best thing to do at a show that intends to transcend stereotypes. Lopez’s comments made me uncomfortable during the whole show. At least Eva Longoria was classy.

They didn’t present any winners to the “Year Behind the Scenes” category, so check the link below for the full list of Alma winners in case it was a separate ceremony. (It wasn’t up when I wrote this.) Here are some genre highlights from the awards ceremony: 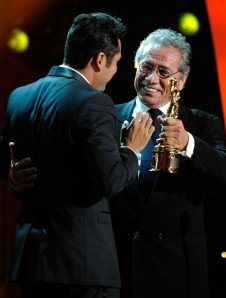 From one boxer to another

I don’t think the Alma Awards are very accurate in actually giving out awards; I suspect they are more image awards than performance awards, and they don’t like to repeat winners. It makes sense in a way because the Alma Awards is a concept created by the National Council of La Raza, the largest national Latino civil rights and advocacy organization in the United States. In the end, I suspect the award statuettes are an excuse to get together and celebrate Latinos in the business in one big fiesta. I’m OK with that to an extent, because awards might end up going to the same batch of excellent actors year after year, and that would get old fast. What we need then are more Latinos in the industry. When we become commonplace, award shows like this will become redundant.

Winners announced on the actual show were (full list here):

And the 2009 Alma Awards Geeky Nominees Are…

This Friday, September 18th, I’m checking out the Alma Awards show! It’s Latino Emmys, Grammys, and Oscars all rolled into one. I admit I am an Alma Awards virgin, but this year it looks like several of my favorite genre peeps will be on the show as presenters or nominees (or both!). Here’s a list of the nominees for 2009.  I’ve highlighted genre shows or film. There are other categories like sports and music, but… yeah. You can see the full list at the Alma Awards website, along with the 2008 winners list to give you an idea of the categories that the Alma Awards focuses on. There will also be a tribute to Ricardo Montalban, presented by Rita Moreno. “Alma” means “soul” or “spirit” by the way.

I don’t want to make predictions because I don’t have a firm grasp on how the show votes BUT I can say who I’m rooting for!

YEAR BEHIND THE SCENES