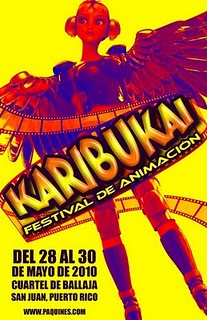 Recently I received a press release with interesting news about an animation festival that will take place for the first time in Puerto Rico next weekend. Here are the details: The Karibukai Animation Festival will take place from May 27th to the 30th at the Puerto Rico National Filmotheque in the north wing of the Cuartel Ballajá, near the San Felipe del Morro Castle in Old San Juan. Karibukai will feature full-length animated films along with a contest for local animated shorts. According to their website, Karibukai is the Japanese word for Caribbean.

International productions that will be shown include:

Karibukai is organized by Paquines, a nonprofit organization bringing animation, comics, and film fans together in Puerto Rico. Check out the Karibukai official website for more details, film listings, and contest info. I’m looking forward to checking the festival out so if you can’t be in beautiful Old San Juan next weekend, I’ll let you know what went down.

Fans Quest to ‘Save Our Seeker’ 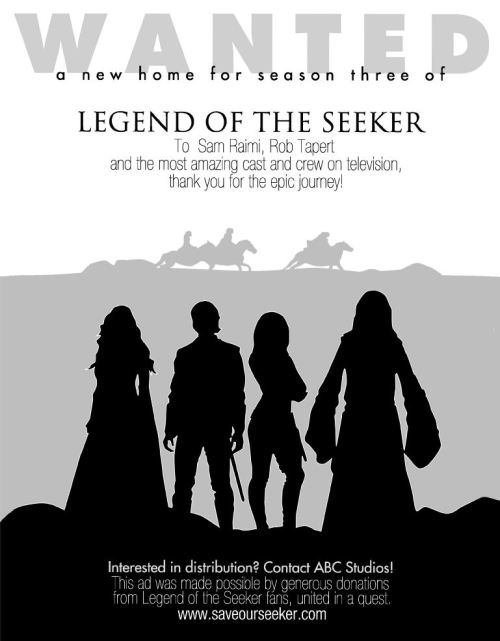 Recently Karen Méndez of IBG Inc. contacted me about the Legend of the Seeker renewal campaign. She is co-organizing efforts to bring about season 3 of this ABC series based on Terry Goodkind’s Sword of Truth book series. I personally love the show; it is beautifully filmed in New Zealand and has an excellent cast. It would be a shame to see it cancelled after only two seasons. Check it out if you like fantasy epics like me. The Save Our Seeker campaign gathered enough funds for advertising in top industry magazines Variety and The Hollywood Reporter– a feat that any TV show follower who’s been in a fan-driven movement can appreciate. The campaign is now bent on making sure as many public libraries as possible have the Legend of the Seeker DVDs. Their DVD campaign will end on May 30, so donate now. If you’re already a fan, there’s no confession necessary.

To date, we’ve published the two ads. There’s also a wide range of other campaigns in conjunction from fans coming together trying to do anything and everything to save our seeker. We email and snail mail to various networks, as well as ABC/Disney. We also have significant ‘Legend of the Seeker’ related items sent in, along with the letters.

One of the biggest boosts we at “Save Our Seeker” have had has been the support of Terry Goodkind, best selling author of the ‘Sword of Truth’ book series which the show is based on. He has graciously offered to collaborate with the “Save Our Seeker” campaign and we are currently working with him to launch a new campaign in the next day or so.

The season finale is [this] week and we hope to change our current situation to an announcement of ‘Legend of the Seeker’ being picked up for a third season.

All of us Legend of the Seeker fans wish the campaign every success. We’d love to continue the adventures of Seeker Richard Cypher, Mother Confessor Kahlan, Mord Sith Cara, and Wizard of the First Order Zeddicus. Find a way to support the campaign- its website SaveOurSeeker.com has several ideas on how to do this.

Tagged as ABC, fandom, fantasy, Legend of the Seeker, Save Our Seeker, Sword of Truth, Terry Goodkind

During my visit to the last Puerto Rico Comic Con (PRCC) and this year’s Free Comic Book Day I met several up-and-coming comic book writers and artists. This article is the first of many about comic book creators on the island. 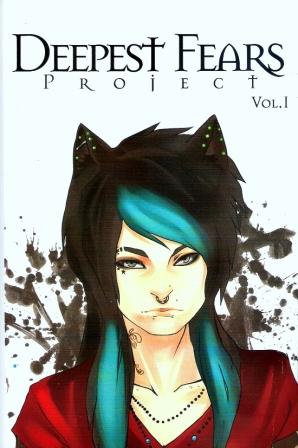 The Deepest Fears Project Vol. 1 introduces a story about three friends who are like siblings that move to Puerto Rico in search of a safer life. It is set in a future where genetic manipulation has crossed animal and human DNA, and some people are part beast. The three main characters, besides being a mix of nationalities (German, Puerto Rican, Finnish, Chinese), are part wolf and panda. You can see it at first glance- they have animal ears and tails. Although this new breed of humans is openly part of society, some pure humans consider them abnormal and abuse them. Deepest Fears Project is written in English, but it may be translated to Spanish soon.

I spoke to the creator and self-taught artist Keishla Rodríguez about how Deepest Fears was developed, and future plans for the series. She and her team are all from Puerto Rico. Ms. Rodríguez definitely embodies promising young talent creatively, artistically, and entrepreneurially. Here’s the interview:

How was the PRCC for Deepest Fears?
It was my first time going to a convention and people really supported us, and we were able to recoup most of what we invested. I didn’t realize there was so much interest in manga in Puerto Rico, even though some people, particularly adults, weren’t familiar with it and we had to explain.  It was super! Our writing team was there, all of us helping out with the setup.

The artwork is great! How did you learn to draw? Before Deepest Fears, had you worked on any other art projects?
I mostly learned to draw on my own, taking web tutorials and experimenting instead of formal training. I have two other mangas, but didn’t publish them.

How did the Deepest Fears Project originate?
It began as an RPG I was in with a friend. We developed our characters and thought of creating a comic strip. But when I took a course in Media Administration as part of my Communications degree I talked to my group and we decided to develop a manga as our final project. The title ‘Deepest Fears’ refers to the central character Shiro, who has made a deal with Hades and is trying to run from what he is, his fears, and inner darkness. Certain songs I listened to helped me come up with the title.

Tell us more about Shiro.
Shiro is the eldest sibling so he’s been taking care of the other two. Shiro and brother Paku were abandoned and grew up in an orphanage, and sister Kirsi had parents but they died. They were friends before the death of Kirsi’s parents, and were bonded even tighter when they did die. Shiro as the oldest feels he needs to be the strong one, yet inside he is afraid of failure and what he’s become.

Who are the ‘Disfigured Saints’ mentioned in the book? Are they the bad guys?
They are like army sergeants commanded by Hades. Each one has their own contingent watching over people according to their sin. They rid the Earth of evil yet ironically are evil themselves. Hades is a dictator type and dominates the planet, although there is someone above him.

How many volumes will the story end up having?
It’ll be eight volumes, possibly with other stories outside of the main story arc but in the same world. We’re working on the second volume now and it should be out around September, depending on how well the first volume sells.

What other products do you have in the line?
We make our own shirts, key chains, stickers, and posters. We plan on making figurines and stuffed toys- whatever we can think of! It’s a job I’m passionate about and once I graduate I’d like to continue making books and publishing them. I plan on finishing the series in Puerto Rico. I don’t know if in the future I’ll go on to formally study about making comics.